There is a difference between seeing paintings and seeing a show. In this case, Augenschmaus. Vom Essen in Stillleben. Or, as it is called in English – Feast for the eyes. Kunstforum. Vienna.

I can only think that the backbone for the show was made up of Norman Bryson’s ideas about still lifes of foodstuff. In the four essays contained by Looking at the Overlooked, Bryson points out that painting can be either of important, distinctive acts of various individuals or of the small and insignificant things which are, therefore, often overlooked. The first kind of painting he calls megalography, the other rhopography. Say, for example, David’s Napoleon or Guerin’s Phedre et Hippolyte – these are tokens of megalography. Whereas Alighiero Boetti’s Planisfero Politico (sic!) or Duchamp’s Fountain are tokens of rhopography. Or still lifes. They belong here too. They have always been the lower domain of the arts, connected with domestic life, daily routines, etc. The show is a clear and beautiful example of the latter.

So let us go back to it.

The show seems pretty much to be an amalgam or, should I better say a… melting pot? What does one of Warhol’s soup cans share with a de Savie’s market scene? The abundance, you might say. The opulence, the plenty. And you might be right. And then, what does a Lovis Corinth slaughterhouse painting and Damien Hirst’s Sausages have in common? Well… meat, obviously! And what does Kolo Moser’s Mushrooms and Clara Peeters Still Lifes do together? They are both still lifes, duh! Yes, if you are to limit yourself to the relationships between this and that work, you will be able to get your answers. But all these answers seem not always to be very well connected, not to make a very coherent whole. The exhibition somehow lacks a guiding line. Perhaps it would’ve been better to have arranged the works historically; but we are talking here about almost 450 years of painting! That would’ve been too much of a task. Or, perhaps it would’ve been more interesting to arrange them according to themes: three, perhaps four themes at the most, that deal with food and still lifes in different ways. As it is, the exhibition wants to say too much about too many things and does not really succeed in making a point. To add to the confusion, various cooks were asked to come up with recipes inspired by paintings of the exhibition. And they did: you can find them in the catalog. And they should be pretty good since the chefs involved are quite well known in the restaurant business. A new fusion area? Hopefully not…

Merleau-Ponty wrote in The Visible and the Invisible that there is a madness in vision. Not in the sense of disturbed mental representations or hallucinations but drawing on the ecstatic character of madness. Vision splits us somehow, pointing out that I am not only here where I am now, but also there, near the visible object. This idea cannot find a better application than in the Kunstforum show. One sees these pictures and one is somehow suddenly transfered inside the world of the still lifes. We are at the market, we stroll through stands and admire the veggies, we buy our meat at the butcher and think what we’ll cook later in the day. Shall it be a good steamy soup? Or a chocolate cake? Well, as you will see, it can be both and a lot more!

I actually fantasized about seeing a Cotan still life hanging there. His still lifes are exceptional. They have a sort of meditative streak to them, an imposing composure that subdue almost immediately. But I should’ve been more realistic. A Juan Sánchez Cotán can be rather expensive (more than 5 years ago Christies sold one for over $5 mil.) and, I presume, more difficult to find or borrow. Anyway, a not very well known painter from the 18th century is going to make you go “Wow!”: Anne Vallayer-Coster. She was very much connected to French aristocracy (being one of Marie Antoinette’s favorites painters) and somehow managed to survive the French revolution (although she never again enjoyed the same recognition). Her two paintings The White Soup Bowl and La Chocolatiere almost succeed in stealing the show from a much better known painter of still lifes and one of her forerunners – Chardin. Diderot, the art critic, seeing one of Coster’s paintings said that, “although not a Chardin, it is obviously more powerful than any other made by a woman”. Imagine that! Diderot… Which brings me to the next thing: what is rather striking is the amount of women artists represented in this show. Beside Coster there are things to be seen from Martha Rosler, Clara Peeters, Zoe Leonard, Sam Taylor Wood, Suzanne Lacy, Berthe Morisot, Louise Moillon, etc. Obviously following Bryson’s ideas, there is an emphasis on female artists.

Well the distinction between the two sorts of painting is but one of the interesting things Bryson brings about. Another is that he connects the above mentioned dichotomy with gender polarity. The male painters whose names everyone knows “produced” mostly art of the megalographic sort. Whereas still lifes belonged to the domain of the feminine, which did not often receive much attention from male painters. They did paint still lifes but usually only as a matter of exercise. Still life encapsulates an area that concerns them only tangentially, bringing up childhood memories (the nurture years) and a time when they did not yet manage to find their voice and define their own self. That among other Freudian issues which I am not going to detail.

That lead many female artists to dealing with this subject over the years. At first, because it was one of the very few fields in painting where they were being allowed to exercise their skills. And then, because they turned against the stereotypical image of the place of women only being in the kitchen, feeding and cooking. Some stuff to think about watching Martha Rosler’s semiotic of the kitchen, for example.

But let us go further.

Among other works, Misia’s Breakfast by Pierre Bonnard impresses with a distant, melancholic mood. Painted at a time when the Nabi group already started to break apart, it points out Bonnard’s readiness to go on his own way, although his warm and earthy colors, a staple of his work, are not yet present in this work.

Soutine – Still life with violin, bread and fish. This is a work from the early Paris time made by a rather needy and unhappy Soutine. Only a year later the American art collector Albert Barnes (quite an interesting person, actually) would buy a batch of works by Soutine and Modigliani from their dealer, Leopold Zborowsky, which would put Soutine in a rather favorable position, not only because he’d have now a bit of money in his pockets but also because the buy created a demand for his paintings. Fish, bread and music. Something for the stomach and something for the soul. The three objects, together with the table they are on seem to have a certain fluidity, swirling away from the field of vision, one after another, seeping out through the lower right corner of canvas. Nothing like the straightness, calmness of Morandi’s two Still Lifes, for example. Or like Cezanne’s Pichet de gres. On loan from the Beyeler Foundation (whose founder, Ernst Beyeler sadly passed away this February). “I will astonish Paris with an apple!”, he claimed. The still life in the show could be a pretty good example.

Now, a couple of peculiarities.

Zoe Leonard’s Strange Fruit – how did this work land in the show? Strange Fruit is not about food. It is not about eating. It is about, as she put it, “sewing herself back together after the loss of a friend”. Just because what we see are several fruit peels that were sewn together does not really put this work next to the still lifes. It is made of fruits but it is not about food. As Sam Taylor Wood’s video is not about food. It could very well be if we think of the maggots having a feast. Or of the rabbit as a game still life. But it is not. The work itself is called A little death. It goes to show that, somehow, the idea behind the exhibition could be swiftly summarized as: If it contains something that is or could be edible, it is good to go. On a semantical level it is a bit of a chaos. There are objects that are not still lifes but contain food and there are things that are still lifes but have nothing to do with food (the Morandi paintings, for example). There is a gap here which is either ignored or not acknowledged.

Then, another peculiarity – quite some paintings seem to have arrived in pairs. There are two Attersee, two Chardin, Justus Junker, Vallayer-Coster, Morandi, Stoskopff, van Gogh, Spoeri, Picasso, etc. Two each. And not always placed together. Just a coincidence? Don’t know!

To sum it up, I’d like to make a note on the title of the show. The paintings are meant to be a Feast for the eyes. However, pretty much any good painting is a feast for the eyes. Any good aesthetic experience has the power to enrich us. Now, are those paintings that display food or deal with this subject matter more prone to it? Are they more of a feast for the eye? Of course, the word is meant to be taken metaphorically here. The feast is also a feast in the original sense of the word, pointing out to food and eating. However, one should not forget that linguistically speaking, it does happen that metaphors tire, get old and become overused. Perhaps, once in a while, we need to have a (still) better look at the overlooked… 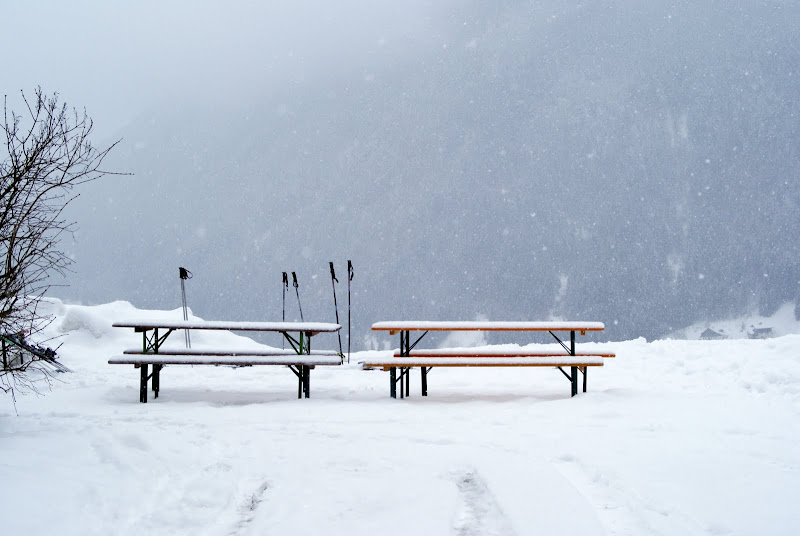