Where are you, my brother? How is the world you inhabit? Are there any parts of it still here? I said good bye to the trees in the orchard and then I went on a last bike tour around the village thinking that I will be flying soon, that I am going to be inside a plane up there and I will be flying to you. That thought whirled in my head like dust devils on a dirt road. I pedaled away on my bike until the village looked like a pile of thick Mahjong cards. Up on the hill-where-everything-is-silent I ate sandwiches with tomatoes from our garden. Just a couple of days left, and then I will be with you again… Another immigrant to be, another déprimé exquis, but we’ll be together and we’ll be alive. Will this miss me? Will I miss this?

He flew over the Atlantic, across carpets of clouds, and over an ocean of scattered, white, foam patches. Then the dark-blue of the ocean became the dark-green of the forests. Then towns started to pop up: brown patches in a thin, nervous system structure. Then, the City. At first, this was a milky cloud, pierced with red sun rays just like a funky tea cozy. Then, a colored patchwork of diminutive buildings on a tawny background. Then, finally, the City itself, his New World, bustling with miniature life. The airplane landed gently on a soft cushion of applause.

In the car, he could hardly hear his brother’s happy voice… He was busy only keeping his eyes open. The drive spun a whole new world for him. Cars in shapes and sizes he never saw before drove along on the highway. Blocks of flats in copper red and silver green, filed one after another. Skyscrapers. Ads. And the happy voice of his brother. The world reeled around him. Trees and cars, lights and people at crossings… So far away already… Such a dark-blue ocean! He felt himself sinking in the comfortable seat of the car, closed his eyes and fell asleep. When he woke up again it was already evening. His neck stiff, his face against the car window, drooling. They were in a small driveway, in front of a garage door with a huge blue fish painted on it. “Welcome… back!” his brother greeted him again. He did not want to wake him up when they got home and he did not want to leave him alone in the car. So, he stayed with him. He kept his left hand over the top of the car, so that the smoke of his cigarette would be taken away by the light breeze of the evening. Kids were playing in a driveway near them, running and laughing. He looked at them, then stretched his body a bit and felt his neck. His brother put an arm around him and smiled. “You’re here… Let’s get in!” 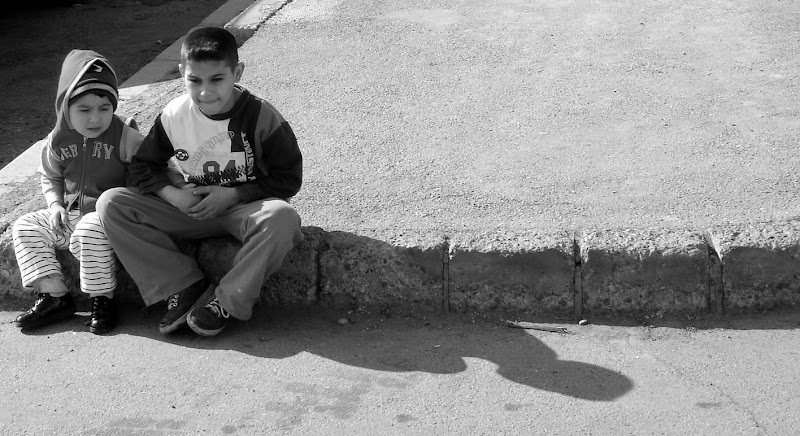