Joueuse – the film. With Sandrine Bonnaire and Kevin Kline. It was the perfect thing to do on rainy Friday evening… It is an uplifting movie. A woman becomes obsessed with playing chess. She had no idea what chess was until she had seen an American couple playing the game in the balcony of a room in the hotel where she worked as a cleaner. Kline is the crazy American Dr. who decided to spend the rest of his life on Corsica and who will be her teacher. She managed to get good at it and, perhaps, her determination will help change the lives of the members of her family. But that’s for us to continue, as we see it fit. It is a European movie, one could see that. And, somehow it manages even to be a French movie. In this way, it reminded me of Parle moi de la pluie.

And, since we’re talking about chess – there is scene in the movie where the two play chess only in the mind, reciting the positions of the pieces instead of having them before their eyes and move them with their hands. Quite some time ago (in 1966), Yoko Ono made a work in which an all-white chess board was covered with pieces which were all white, as well. The work was titled “Play It By Trust” and the idea behind it had to do with the impossibility to distinguish between one’s self and one’s opponent – How is one to play when one cannot set herself apart from one’s enemy? That was shocking at the time. It is not now. Certainly more shocking was her “Cut Piece” a performance which she enacted several times, the first time in 1964. She’d sit on a stage and members of the audience were invited to cut her clothes until she was naked. Existentialism. Painful childhood memories during and after the war. Loneliness. Lovelessness.

Why do artists do what they do? Very often, the answer you get when you ask this is – Because I cannot do anything else; that’s the only thing I can do. Some go even further and say that they feel they would rather die than not being able to make their art. And then, when asked what does their work mean, very few can deliver an answer. There is the political and social issues which inform their work. Richter’s Cell paintings, for example. Perry’s pottery. Gilbert and George. Then, very often is the personal stuff involved, their own life which they try to put in order or of which they try to make sense and thus they need to bring it out. Think of Tracey Emin’s works. Sam Taylor Wood. But then, most of the artists point out that “the meaning in art lies outside the artist” (Joe Tillson). The ways to get to the finished art work are so different and unexpected! One would swear by color. The other would think it unimportant. One would talk to the painting. The other would try to intervene as little as possible. Etc… Just read these ruminations:

Rauschenberg (up on a ladder, sounding a bit drunk) – Painting relates as much to life as it does to art. But you couldn’t make either. You have to work in that hole, between the two. The artist is almost a bystander. You begin with what you have, and see where it can take you. … No painter was able to help another. My paintings are invitations to look somewhere else.

Frank Stella – The idea behind the paintings – to keep the viewer from reading a painting. It should not be immediately apparent how it was made; it should be hard for the critics to describe and to explain it; difficult to point something out for the viewer that the viewer might have missed if he were slightly untrained.

Joe Tillson – A painter’s value is in what new images he could add to the tradition (citing Matisse).

Sandra Blow – Beginning with something and then looking at the painting and waiting for it to talk, to see what more it needs to be complete.

Howard Hodgkin – Art comes from art. The past is all we’ve got. Color really doesn’t matter. Colors are just functional. You can make the color mean what you want. You just have to change the other colors accordingly. I am aware of the subject but once started, the painting tells you what to do. … A work of art contains a maximum amount of feeling.

Anish Kapoor – Form and color can have historical, psychological, physiological memory. You can push the viewer towards that something else.

Gary Hume – Life is a negotiation; there must be gloom in it. Color is everything I’ve got. … Many of my drawings cannot be made into paintings until I find the right color combination. If the drawing is wrong, it can never become a good painting.

David Batchelor – the thing about color is that it always escapes the attempts to confine it intellectually. The challenge – making something that can both be art and be about art.

Gilbert and George – We don’t know exactly what we’re doing but we have to be like that. … We are moral artists but not moralists.

The way I see it, artists are philosophers who… get away with it. Not really knowing what they want to demonstrate. I mean, you cannot make philosophy unless you have a sound knowledge of logic. You have ideas, you have to make them clear and to express them in ways the others would be able to understand them. Thus, you go ahead building up your system, addressing pretty much everything there is and trying to define your position as well as possible. Your peers, the other philosophers, would try to dismiss your ideas, would criticize you using all sort of arguments (which were tested during the whole history of the field). You have to stand your ground and explain to anyone what you wanted and how you wanted to do get to it, etc. Du feu des opinions jaillit la verite! Isn’t it nice? Well, would someone tell philosophy there isn’t such a thing? There is no truth as such. There are just truths, which other philosophers (we usually call them artists) try to bring to light. There is no logic here. None that should be unanimously accepted, anyway. The works are validated through a rather awkward method – they have to feel right. They are done when the artist feels they are done, when they are in that particular place, where the world, the  painted canvas and the artist meet. They do not need to justify themselves. If the work is good it would find supporters. If not, not (of course, there are exceptions and nuances). With a philosophically informed essay on the structure of the world, for example, things would be quite a bit different.

The process of producing art is never the same for anyone. The meaning of the work is never similar. The color is never similarly perceived. There is such a diversity that one could almost get lost. Actually, that’s the greatest danger art should be aware of – the multitude. Is there too much art out there? Is this whole stuff that is being continuously produced ever going to be assimilated as it should? Should it be assimilated at all? 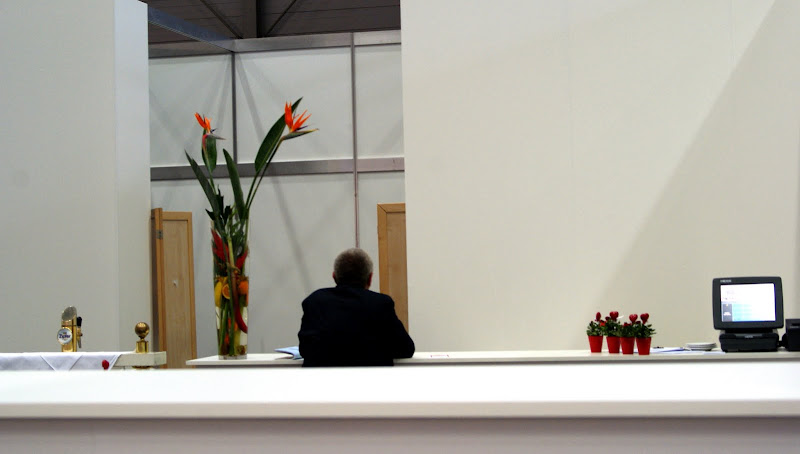