His house had stone walls. Big brown stones. And between them, scattered here and there, smaller white, round stones. Over the door frame one of these white stones had been painted – a lady in a green outfit with a straw hat holding an umbrella against the sun. Just as you would see in a century-old photo. Over, on the back wall, another one. Now, something in the way of an icon. A saint of a certain kind. And then, I discovered yet another one – a flower bouquet. All, small, almost unnoticeable. All bringing a whiff of color into the brown-white monotony of the walls. How did they get there?

Do you want to know?, he asked me.

Of course I do!

Look!… There is this woman. A big woman. I mean not fat but big and strong. And yeah, she is a bit fat but not much. She’s big! And she used to drive a fruit and vegetables truck to Athens. Every day for ten years. She had a husband. He used to drive the truck but then he died. He made her three children and then died. And he drove the truck up and down these streets. Is not easy you know. They are really dangerous the streets here, up in the mountains. So he did this and then died. And then, because she had to feed her kids, she started driving the truck. A big woman she is, wheeling that truck on these narrow streets. Can you imagine that? Like from a movie. Or something. And she came to visit when the house was not yet finished. She was curious and I told her to come and visit. Because now she does not drive anymore. She has an inn. An inn where there is nothing to eat. I mean, there is something to eat, but only the usual stuff. Nothing cooked. But she would cook if you’d give her time. She’d come and tell you what she could cook and if you’d want, she’d cook for you. Meat and stuff… Whatever she’d have… And so I met her and we had lots of fun at her inn. You can imagine how much one needs to drink on an empty stomach to have good fun. So, we had fun. And then I told her about the house and she came to visit. See how much is already finished. And she was a very poor woman. Sad, I mean. Her husband died. He made her three kids and then died. And her father died. The Nazis killed him. He sided with the communists and they killed him. She was just a kid back then. And then her husband…. And she took up driving the vegetables truck to Athens. Do you know how hard it is? Such a job? Up and down the mountain. With five tones of apples at the back. Or whatever else she was carrying to Athens and sold at the market. But she is a big woman and she managed it. And then, when she came to visit she looked at the house and liked it and we talked and she told me about her life and… it was nice. And then she said she did not bring me anything as a present, you know, house warming present thingy. But she told me she had only one joy in her life, something she always did and liked. You know what that is? When she’d have a bit of time she’d go down to the beach, she’d find an isolated spot and she’d sit there with the waves and the sun and the sand. And she’d paint. Small stuff, little things… on the white stones she’d find at the beach. Not that bad, you know! Not bad. And she said the only thing she could give me would be these stones she painted. She brought three of them along and she gave them to me. I thanked and she went away. I put them in the walls later on. She does not know yet where her stones landed. But I’ll invite her once and let her discover them for herself. I hope she likes them that way. Boy, she is really one of a kind. Such a big woman…. But very nice, you know… 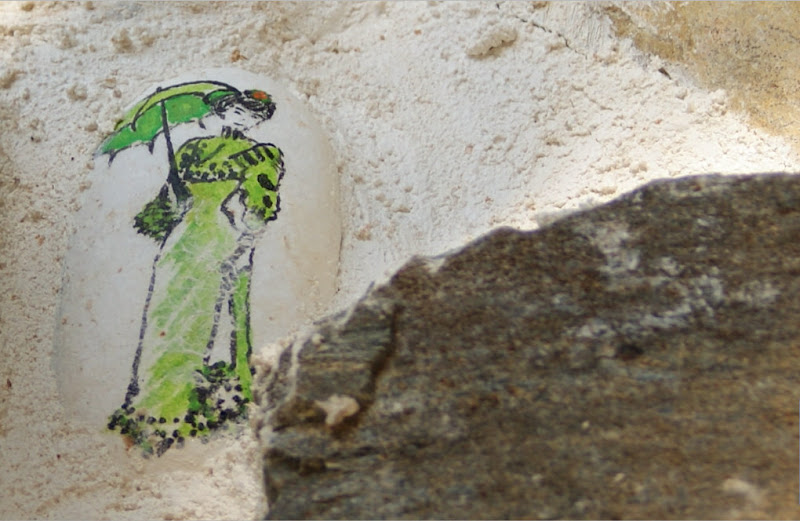