Most contemporary art is conceptual art. Seeing Gröting’s work in Lentos I had to think about it again. Today’s art comes from language and words and, to see it and understand it, you have to make the effort to put it back into language, to drape it up with words and commas and dots. Not Damian Hirst dots but sentence dots.

Gröting’s work is fun to look at. One expects to be confronted, once again, with the burden of being alive in this day and age which has once again been expressed through art. Well, not this time!

Ja und Nein, for example. Two chairs placed on the floor inside two iron hemicycle frames which, in turn, are activated by small engines and move, one up and down, the other left to right. Imagine yourself sitting in one of those chairs and having the world being moved for you. Your opinion does not count any longer. You don’t have to have one. The world does the Yes and No work for you. Just sit there and let the world do its job.

Or, take Mensch, for example. Not really a human being but their digestive tract. Made of glass. Of Murano glass, to be more precise. It does look impressive on the cement floor, so finely polished and sparkling as it is. You can see through it. You can see through a human being. This tract is a clean one. And it’s made of glass. A moment of inattention and the whole thing could break into pieces, as sturdy as it might appear to be.

Or, Käfig. Suspended a few centimeters above the floor, it looks so fragile it could turn any second into a sea of marbles, rolling all over the place. How can that be a cage? What else except air could it confine?

Einen Funken Leidenschaft. I would’ve liked the whole thing producing the spark to be hidden away. I do not know why they left a rather large opening there through which you could see the wires and the generator. It would’ve been a lot more interesting to only be able to see the spark inside a wall and nothing else. That alone attracts. What gold used to do, shining on Klimt paintings, for example, now an electrical spark should be able to do by itself.

Space Between Lovers. Antony Gormley cast himself thousands of times in his sculptures of and about the body. This time we lack a body per se but we have two halves, tightly joint together. And made of glass. Again, sturdy but also fragile. They could have any face you’d like. They could be anyone you want.

They say that when Raphael painted the frescoes in the Villa Farnesina in Rome, got so “worked up” that he had to leave the work and go across the city to his girlfriend. The scenes he painted were so erotically charged that he couldn’t bear it too long without her. Agostino Chigi, who wanted to have his villa finished sooner rather than later, arranged for Raphael’s girlfriend to live at the pallazzo, a move which made Raphael happy and sped up the work considerably. The shortening of space between lovers makes wonders, doesn’t it? Well, Gröting took this space away, completely.

Acker. As if the light of the moon got impregnated onto the blackness of the field and now it reflects it back. A poem by Poe and the crow would’ve brought the whole thing on the heights of Romanticism.

Memento Mori. I do not know what was her position vis-a-vis the Palast de Republik in Berlin. These are bronze mirrors from the building which was torn down recently. Remember you must die! 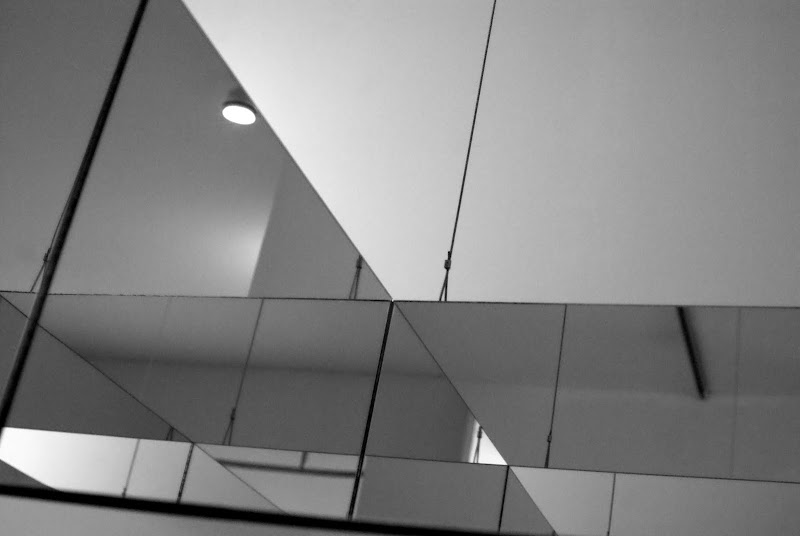